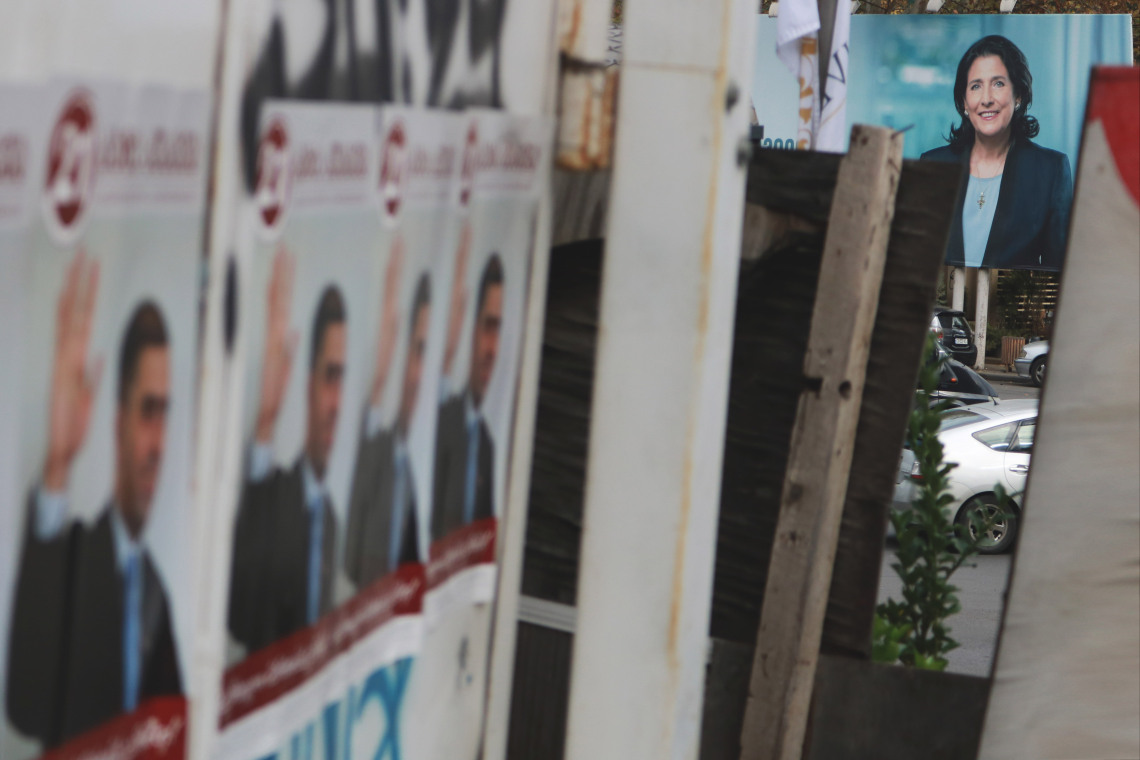 In Georgia’s current political system, both the government and the Prime Minister have powers over the President. The winner of Sunday’s election will not be able to increase salaries and pensions, or decide how much will be spent on social needs. Anything proposed will need the support of the ruling party.

The top four candidates (Grigol Vashadze, Davit Bakradze, Salome Zurabishvili and Zurab Japaradze) during the campaign sometimes made promises beyond the responsibilities of the president. However, some experts say it’s important the candidates to speak about different issues so the public is informed about their views.

Grigol Vashadze, 60, is the candidate of ex-president Mikheil Saakashvili’s United National Movement. He started his campaign with the slogan “Together We Can.” Vashadze promises to set early parliamentary elections and form a new coalition government. He announced his willingness to reduce bureaucratic expenses and spend it on social needs. He wants to increase teacher salaries to 1,000 lari.

Unlike Japaridze, whose political agenda calls for marijuana legalization, Vashadze is against the cannabis cultivation law.

Davit Bakradze, 46, represented the  European Georgia Party, says “Let’s Control the Government Together”. He promises to present the voice of people and not be instructed by the government as a president. He promises to reduce taxes and highlight economic issues. He promises to increase pensions by 50 lari, to expand government funding for students to study abroad, and to create more jobs by attracting new investments.

Salome Zurabishvili, 66, independent candidate who is supported by the ruling Georgian Dream party, started her campaign with the slogan “Together for Georgia”. Zurabishvili considers the president as an idea generator, not a veto generator. She raises issues related to emigrants and immigrants emphasizing the importance of making good conditions for all, both in and outside Georgia. Zurabishvili promises to reveal the truth about Georgia’s first president Zviad Gamsakhurdia’s murder. She promises to protect independence and sovereignty of Georgia.

Zurab Japaridze, 42, who leads the libertarian Girchi party, used the slogan “#MoreSex, #MoreFreedom”. His main target is young voters. Japaridze announced that he will give amnesty to all who were “unfairly punished by the system”. He wants to double the finances allocated to defense. Japaridze promises to veto laws which limit human freedom. He promises to decrease the costs of the President Office’s from 90 million lari to 15 million lari in six years. He also announced that he wants to sell The president’s residency and move to  office space.

Political analyst Gela Vasadze said that almost all candidates speaking about fighting poverty and creating jobs are exaggerating their powers as given by the Constitution. “I can’t get serious about presidential promises to overcome poverty or increase pensions, because the president of Georgia is more like a special foreign minister, a person who will represent the country, nothing more,” Vasadze said.REPORT THILevan Tsutskiridze, political analyst and executive director of Eastern European Centre for Multiparty Democracy, spoke with Spotlight about the importance of raising the wide range of issues discussed by the candidates. “All the candidates can speak about many things… I know we will see there are things they can do and there are things they cannot do. However, it is also important that  presidential candidates speak about different issues — not only those within their power — because people are interested in the views of those politicians,” he said.

Tsutskiridze noted that during the presidential debate some candidates admitted their promises would depend on the support of their own parties.: “The President himself or herself cannot do that, but the President and the Parliament jointly can do that.”

Zurabishvili was the only candidate with the support of the ruling party. As Thutskiridze said,” If you don’t have a majority in the Parliament it’s impossible, but we don’t know what’s going to happen in the future.”

He said that when candidates promise to increase pensions and salaries, journalists should ask when and how. “Unfortunately, populism has become mainstream in Georgia and that is not surprising,” he said.

After the new president’s inauguration, the new powers of the post will enter into force, based on 2017 constitutional changes. This is the last time when the president in Georgia is elected through direct elections. Starting from 2024 the President will be elected by a 300-member Electoral College for a five-year term. The President remainshead of the country, supreme commander-in-chief even in wartime,  and the country’s representative in foreign relations. With the agreement of the Prime Minister, the President announces emergency and war situations. The President grants amnesty, appoints the dates of parliamentary and local elections, and dismisses the parliament when it fails to elect a Government. The President also signs and publishes the national budget.