Mirza Nozadze, one of the organizers of Rioni Valley movement, a friend of Varlam Goletiani and his family, talks about the history of the resistance and the unique precedent of uniting people around uncompromising peaceful round-the-clock tent protest, almost 200 days now, for what they believe is a fight for a better future of Georgia.

“Varlam and I worked out the plans for the resistance movement over several months before the first tent was put up in the valley. When I realized the questions raised by the actors of the resistance were legitimate, and that the government was intentionally avoiding answering them and misleading public opinion about the movement, I decided to leave my family and daily routine and move into the Namakhvani Camp. I wanted to protect our fundamental rights as guaranteed by the Constitution of Georgia.”

Whose fight is this? Tell us about the collective or community standing up for the valley for several months now.

This is the fight of the Georgian people aiming to challenge the Government of Georgia and the relevant attorneys on their ignorance and negligence, on their signing of a memorandum with a private investor company for a project as complex and important as the Namakhvani HPP.

Despite the shameful narrative led by the government which tries to present the resistance movement as xenophobic and destructive, as a protest led by people with a lack of social and economic consciousness, people as dark minded and ruled by foreign enemies of the country, the organizers of the Rioni Valley movement have successfully managed to prove the complete opposite to be true.

The extent of the support, with the arrival of different groups from all over the country in Gumati, and with self-organized demonstrations both inside and outside Georgia to express solidarity with the movement, shows an empowering of the movement and its legitimation in representing the voices and interests of the Georgian people.

In some respects, this protest united all those in Georgia who have experienced injustice.

In some respects, this protest united all those in Georgia who have experienced injustice.

What does the protest against the Namakhvani HPP include and what does it mean for our society?

The protest started in 2009, during the rule of Saakashvili’s [UNM] government, when it was announced that the Namakhvani HPP would be built. The resistance started with questions. It was not that in all cases we opposed the construction of the HPP, but we wanted to know how safe it would be, and what kind of impact it would have on the environment, flora, fauna, local culture, and on the whole country.

In the process of asking these questions, the government chose language that discredited us, responding with “Who writes these questions? Whose messengers are you? Which NGO is behind you? Are you Russian agents?” In fact, had the government answered our questions normally and shown some respect, the project could have continued without resistance. But because they had no answers and did not expect such interest from us, from the very first day, they created an environment implementing the project in violation of the law.

The law stipulates that when such a large project is carried out in any geographical area, it is essential that those people who are directly or indirectly affected by the project are fully informed and are involved in dialogue with the authorities to get any answers they need.

Instead, the government deliberately ignored the population, and if there were any discussions in the region about this project, to formally meet the requirements of the Aarhus Convention (which Georgia is also a member of), they would only sit down with company representatives or their party activists, who were not even from this region. We were not welcome at such meetings.

The kind of communication strategy offered by the government created mistrust between us. And that made the resistance more principled and informative. On the 80th day of our stay in the tents, we forced the authorities, based on a journalistic investigation, to make the contract public. It should have been public as defined by the law.

The government tries to portray us as a group that in no case wants to build a hydropower plant in Namokhvani, which is a misconception. We are, in fact, saying no to the Namakhvani HPP because of the contract, the security breaches that we confirm exist. It is an anti-state project, causing serious damage to nature, and its expediency has not been confirmed by financial analysis. Therefore, we want to make it a subject of dialogue, whether it should be built or not.

We residents want to make sure this HPP is really worth leaving our houses, our cemetery, our church, everything, for.

If the Government of Georgia is unable to demonstrate the existence of such fair, objective and rational answers to our questions, then they must cancel the memorandum with the investor, regardless of the sanctions and fines that may be imposed on the country; declare a moratorium, and initiate public discussions in order to define the best strategy for using our energy resources so that all future possible energy projects are designed and executed according to the will of Georgian people, who are the owners of such resources.

What is the hardest part in this fight?

The hardest part of this resistance is experiencing the unlawful and antidemocratic stance of the government. Instead of the officials getting involved in a dialogue with their people, they are ignoring the voice of the members of the resistance and using unacceptable language of radicalization and marginalization in an attempt to discredit us.

How would you evaluate the overall common strategy of the government and the company ENKA at this stage?

Surprisingly enough, the government continues to ignore the true spirit of the protest and is mainly occupied with running negative PR campaigns against the movement with the intention to harm and discredit the nature of the resistance. But as a result of their dark PR campaign, we have seen the protest grow, which is a clear sign that the people of Georgia are cleverer than perceived by the government.

Yet, instead of acknowledging the legitimacy of the expanded movement and creating a space for true and rational dialogue, they decided to further their stupidity and ignorance by using law enforcement forces to stop the spread of the protest. We saw deliberate destruction by the police when they removed the tents from the Namokhvani area with the aim of restricting the peaceful and constructive protest.

Furthermore, we saw and experienced unjustifiable barricades and metal fences in the village of Gumati with the aim of restricting the free movement of local residents and other citizens of Georgia. And, as an extreme form of the government’s ignorance, we have also experienced the use of disproportionate force when dispersing peaceful rallies four times.

In all of the above mentioned scenarios, the government repeatedly failed to produce legal justification for their orders, despite the request of such justifications by the members of the protest, NGOs and even by the Ombudsman. Needless to say, all the above actions are unacceptable means deployed by the government to deal with peaceful protest. Such moves contain significant threats towards our declared democratic values, among them liberty, justice, truth, popular sovereignty, and patriotism.

What type of support would be the most important to you and the process these days?

The government continues to communicate with us through repression, including covert repression, such as threatening to dismiss people from public service. Three people were fired for participating in a rally in Kobuleti. The government also continues to inflict a shameful black campaign, declaring us Russian agents, or people who are not interested in the economic development of the country.

We faced the need to leave the valley and continue our protest in Tbilisi. Since the very beginning of our resistance, when there were five of us, then 20, and then more and more, standing side by side, we managed to unmask the government and show the unlawfulness of their actions, their negligence, and the harm they bring to the national interest.

I appeal to the population: it does not matter now whether we support or not the construction of the Namakhvani HPP, the national positioning is what’s important here. With this popular movement, we set a precedent that in the future, when a problem arises, the government will be accountable to the people and fear that if they do not respond adequately, as should any democratic state, the people will unite again.

It is important that we show the government our unity and stand together as a nation. Regardless of our differences, we were able to unite different groups of people, and instead of receiving any political or other dividends with this union, we are serving the common goal, which is to demonstrate our power and tell the government” “If you do not come to your senses, more people will come out to protest, you owe it to us to do your job properly and fairly.”

Our standing together on May 23 is crucial for us to continue to develop into a democratic and prosperous nation and country and to prove that by standing together and demonstrating the voice of the people, the government will have no psychological or historical experience to say “We can silence them.”

It is vital at this stage of the protest that the voice of our people is not only heard in Georgia, but outside Georgia as well. We have managed to meet the representatives of several ambassadors in Georgia, including those of the USA, EU, UK, and some international organizations, including USAID, with whom we had our first opportunity to informally chat about the true content of the protest, which as we all know is quite different from what the government is trying to present. For example, they now know from the original source that we are neither a “no-hpp-campaign” nor a xenophobic group of people trying to kick foreign investors out of our country to prevent the sustainable development of our country’s economy.

It is crucial that international society carefully observe and evaluate how democratically the processes are conducted by the organizers of the rally, how much responsibility they show towards the law on freedom of expression and demonstration, and how the government behaves at the same time.

By their involvement, they should ensure the creation of a democratic environment for dialogue between the people and the government, which I think is in their interest as well, since they support us in establishing a democratic state in which dialogue should be used to draw conclusions and resolve issues effectively. 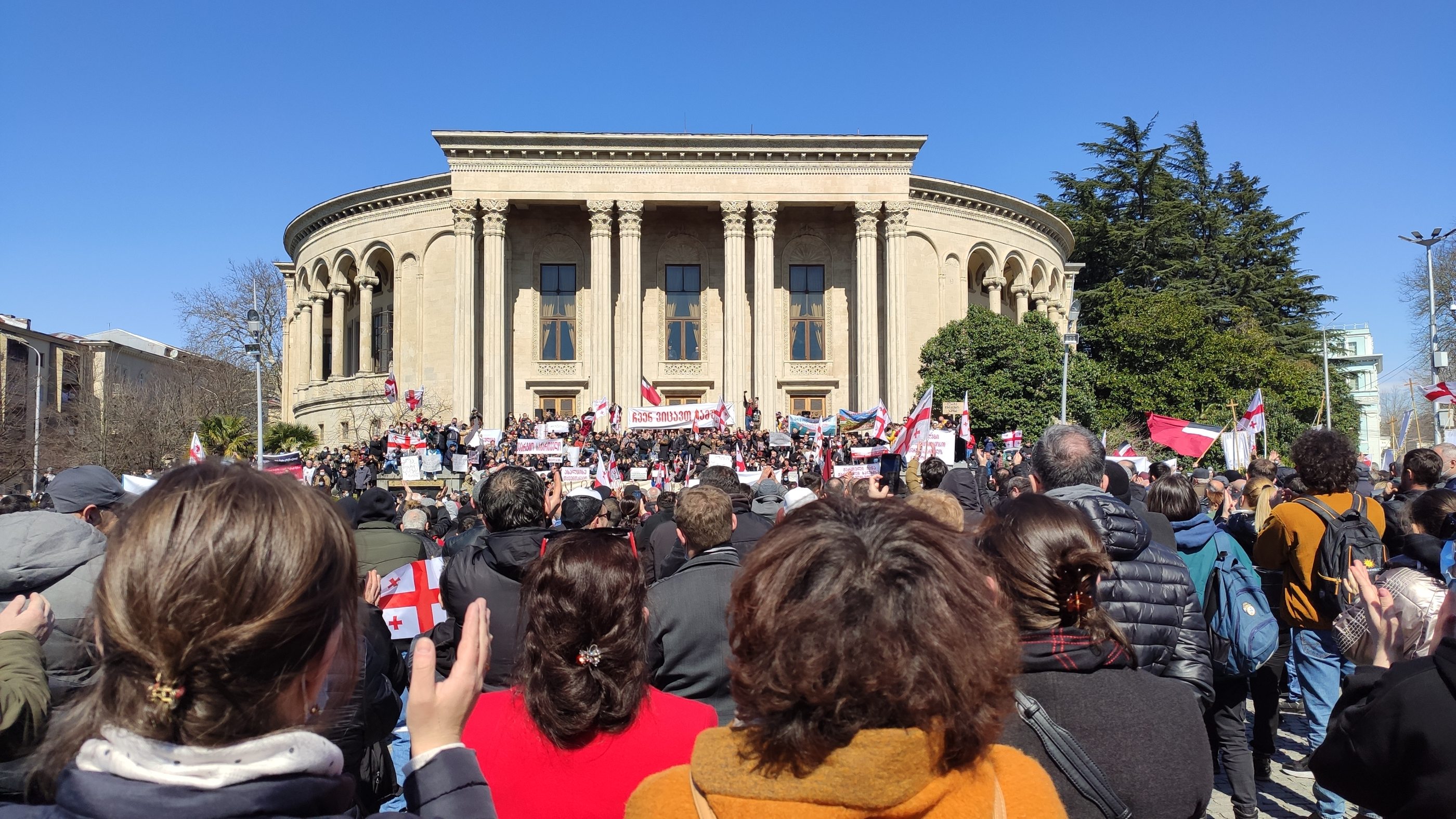 Do you see the potential to expand this protest and link it to other social issues and injustices in the country?

If the Government of Georgia continues to be ignorant of the extent of the protest and to deploy oppressive means against the people of Georgia, this will automatically result in an expanded protest.

Without a single effort from the leaders of the protest, we have seen self-organized groups joining the resistance movement from different cities throughout Georgia, expressing solidarity and support purely as a result of the stupid and unacceptable act of police forces aggressively and repressively dispersing members of the protest. The people of Georgia read this action as a threat to our democratic values and, of course, we have seen an expansion of the protest as a result.