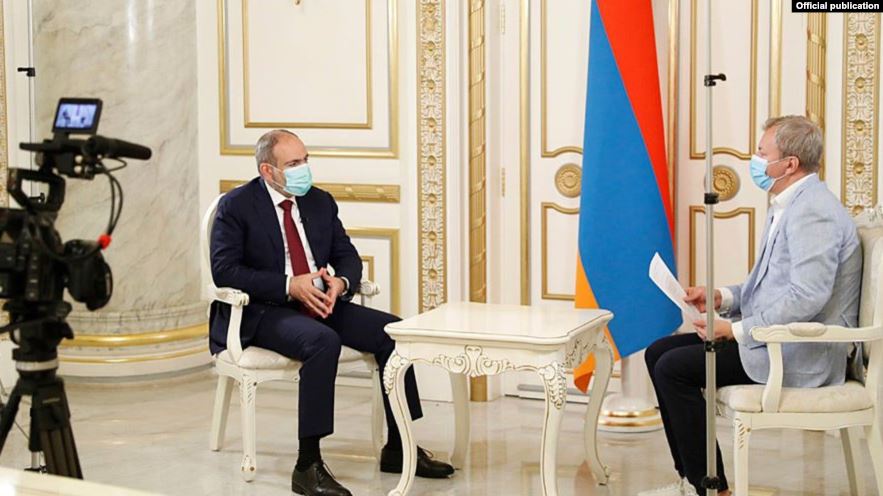 In an interview with Russian Media outlet Armenian Prime Minister Nikol Pashinyan was asked to
comment on a scandalous post of Margarita Simonyan, the Editor-in-Chief of Russia Today TV Channel.
Earlier Simonyan wrote a Facebook post condemning Pashinyan for anti-Russian sentiments, as well as
for jailing opposition leaders which used to be close partners with Russia.
The Prime Minister of Armenia stated that Simonyan's post caused a huge negative reaction in
Armenian circles."Russia must register and understand that Russia's ally in Armenia is neither
Pashinyan, nor Petrosyan, nor Poghosyan, nor Kocharyan, nor Sargsyan ․ Russia's partner and ally is the
Armenian people. This is a very powerful delicacy. Many politicians have introduced themselves as
Russia';s sole ally. But that ally is the Armenian people, not individuals, businessmen, families or
politicians. ;This is because we [Russia and Armenia] have common strategic interests, which do not
depend on Pashinyan and Poghosyan,&quot; Nikol Pashinyan stressed.
The Prime Minister of Armenia also touched upon the question, what can be done so that such issues do
not arise in bilateral relations? ;Armenia must take into account the feelings and goals of Russia, the
Russian people, and our partners in Russia, the Russians, must take into account the feelings and wishes
of the Armenian people.
Responding to Simonyan's criticism that Armenia has not yet recognized the independence of Crimea,
Pashinyan noted that Armenia has not yet recognized the independence of Karabakh. - Does it mean
that we do not support Karabakh? No, we declare that Armenia is the guarantor of Karabakh/s security”
“Armenia stays where it is”, - concluded Pashinyan.